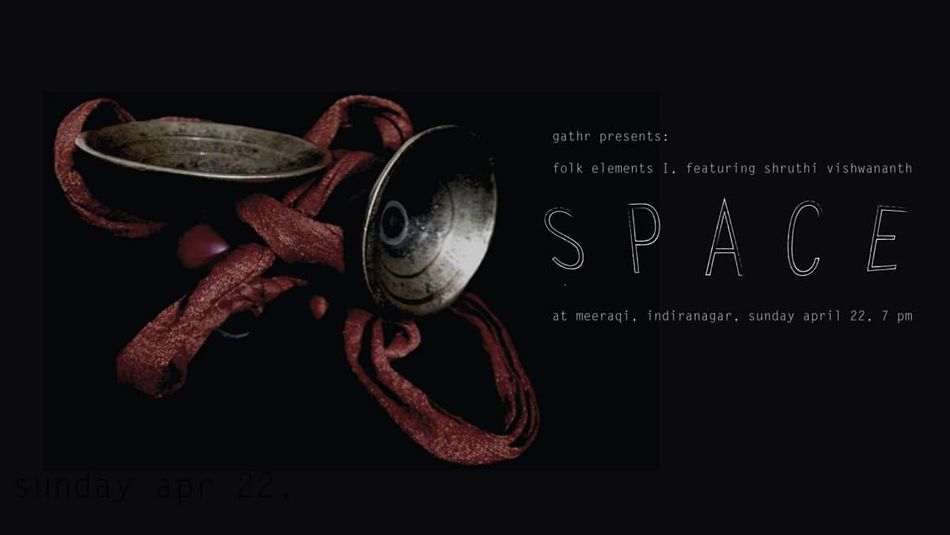 Folk music is peoples’ music. It is an integral part of the coming together, whether in work, celebration, battle, mourning, healing, wonder or awe.

As we peer through different lenses to better understand human interaction, we are ambitiously using the wisdom of the Indian Sages, using the Panch Mahabhutas or five elements* as a loose taxonomy for a five part folk series.

For the first iteration in the series, It might seem counterintuitive to start with space–aka aakash, ether, emptiness, shunyata–instead of earth, solid, grounded. We begin with the other pole, space, because it is the everywhere, inside and in-between atoms and starts, the interconnectedness of all things. Shiva’s tresses unobstructed, omni-directional. Related to the higher chakras in yoga, Shruthi Vishwanath will dive into the most mystical of the five elements. Through the words and music of poets from across the subcontinent, including Kabir, the Nath poets, the rhythmic writing of the vachanas, Buddhist chants and abhang poets, we too will try and taste how the emptiness and the infinite can merge.

Shruthi Vishwanath is a musician, composer and educator. Trained extensively in Carnatic music, her quest for a music that was more true to her led her to the works of Kabir, and the mystic poets. She now explores the intersections of classical and folk, intellectual and visceral by singing the works of poets from across the subcontinent in different forms of music. Her interpretations of abhangs have resulted in several new revivals of unknown works, especially of women saints. Shruthi has performed at venues and festivals across India and abroad. Some key performances include the Kabir Festival of Mumbai, Malwa Kabir Yatra, NCPA, India Habitat Centre, an IFA showcase series in Singapore, and at Raga Forum for Indian Music Vienna. She is a grantee of India Foundation for the Arts.

*The descriptions of these five constituents are quite similar across Sankhya, Tantra and Buddhist philosophy and even Greek Stoic texts. Googling will reveal more.

Please fill in your details